So Kentucky didn't go as planned, but my re-affirmed sense of worth and drive to make-up for that long walk back to the box fueled my fire to make the trip to Knoxville Tennessee to attend one last event of the season at River Glen.

Without much fuss or fanfare, P went out, put down his head and won the event - start to finish.  He is nothing short of amazing, and every day I thank my lucky starts for those big brown eyes and soft nose with the kissing spot.

BUT - the long drive home gave me a long time to think.  Usually I spend it singing to the radio and generally annoying everyone within ear shot, but this time I was by myself, with a quite truck and a busy mind.  P turns 17 in 2015.  Eleven years he's been my rock.  He's sound, he's happy, he made me a successful upper level rider with placings at Preliminary and Intermediate levels.  This last year he ran 5 times - pulled in in Kentucky, one 3rd, one 2nd, and two wins.  He has nothing left to prove.  Is it worth the money, the risk, and the time to keep running him around, just for my pleasure?

When I posed the question to my wise mother, her answer was the one I knew in my heart... NO.

So with a heavy heart I found myself on a plane, flying back east from my hometown, pondering the future for the brown boy who has been the biggest part of my past.  To stomach the decision I'd just made, I needed to have the wheels rolling on big plans for both of us. For P, a student who happens to be in the right place in her life, during the right time for him seems to be the obvious choice (hopefully more on that in the coming weeks). And for me, there's another pair of brown eyes that I'm throwing my heart at in the hopes that he can step up to fill P's incredibly large, talented shoes. 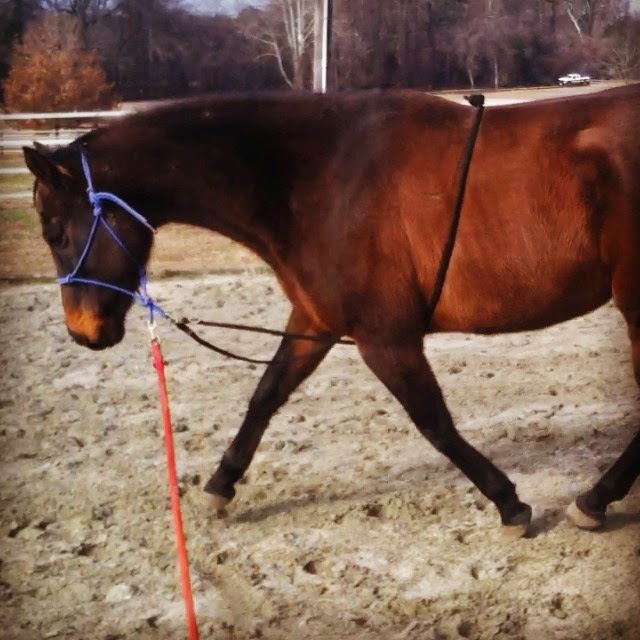 So, meet Van - or Exclusive Print.  Van reluctantly came into my life last February.  He'd been basically abandoned at a New York race barn, and I shipped him and another horse down to see what they'd do.  The other horse was a war horse - racing until 8, and selling quite quick to move on into hunterland.  Van on the other hand was fairly sure that humans were not nice, and refused to be caught, became violent (even under sedation) to anyone trying to touch his ears.  So I didn't touch him - until he said he was ready.  He's now gone on hacks, walks and trots quietly in the ring, and allows me to put on his bridle without much fuss.  His place in my heart is growing and I can't wait to see what he becomes!